Lan was born in Saigon, Vietnam in 1961, the same year that President Ngo Dinh Diem was elected President of the Republic of Vietnam. The years that followed were turbulent, marred by internal struggles among armed and warring religious sects as the country tried to consolidate power in a central government. North and South Vietnam were also at war, a prolonged and bloody struggle that devastated all Vietnamese in both parts of Vietnam.

Amidst this violence, Lan found solace in books. Her love of reading and writing began early in her childhood when her parents gave her a copy of 1001 Arabian Nights. She was fascinated by the story about a woman who saved her life and her sister’s life by telling stories, their fate hanging on the fabulous words that make up each story’s thread. She also loved the epic adventures of Chinese swordsmen and women written by the master Chinese novelist Jin Yong whose protagonists lived by a strict code of conduct – humility and patience, love and loyalty, paying one’s debt and keeping one’s promises, all the while performing stupendous, gravity-defying martial arts feats.

In 1975, when South Vietnam was conquered by North Vietnam’s Communist forces, Lan was adopted by an American officer who was a close family friend and sent off to live with his family in Avon, Connecticut. When her parents arrived in the United States several months later, she moved to Virginia to live with them. In the fall of 1975, she started American high school as a freshman. There was no war in Virginia, but there was loss of country, loneliness and sometimes outright hostility as a great deluge of Vietnamese refugees entered the state. Again, Lan found comfort in reading. Her parents dropped her off on Saturdays and Sundays at the public library where she serendipitously discovered and fell in love with poetry, particularly the poetry of T.S. Eliot and Elizabeth Bishop. Her love of novels began when her 11th grade AP English teacher Helen McBride introduced the class to James Joyce’s The Portrait of the Artist as a Young Man.

She was inspired to write when she entered Mount Holyoke College and read Toni Morrison’s The Bluest Eye in an independent study about identity, culture, and trauma with her professor Penny Gill. Penny encouraged her to keep a writing journal. Lan continued to write and was moved to write stories that are mined from “diving into the wreck,” as Adrienne Rich put in – the wreck of war, loss, disjunction.

Once she began writing, she could not stop. She wrote long-hand on yellow writing pads while riding the New York City subway on her way to work as an attorney. Her first novel, Monkey Bridge, came out of her desire for and need to come to terms with the journey of war, immigration and exile. Her new novel, The Lotus and the Storm, is about war, loss of country, and the complications of family and love. 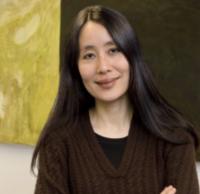 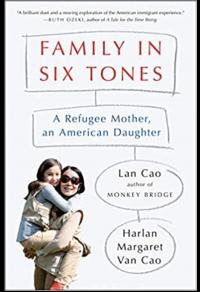